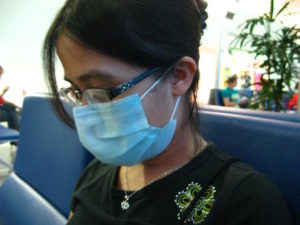 with all of these germs going
around
and around

and all of this staying up late
blogging
and blogging

it figures I would catch some
nasty
nasty bug

that would leave me wheezing and
coughing
and coughing

(rather than catching some
nasty
nasty bug) more kidney stone craziness. i ended up in the emergency room lately with nasty kidney stone pain, which of course, has often been described as the worst pain imaginable, second only to childbirth (a minority of women report that kidney stones are worse). after getting nice and morphined up, the doctors had me zapped with x-rays, ultrasound and the kitchen sink to find out that the 1cm stone that came out of my kidney last year had shrunk to 8mm (yay -_-) and had moved down to just above the bladder (O_O). zounds. does that mean this whole episode might soon be over? my next step is to call up my urologist and book an appointment, hopefully to blast the living daylights out of the stone before I get even more attacks. so yeah. exciting health news. kidney stones are bad craziness. my dad was particularly worried about me, especially after hearing about the tens of thousands of children in China who got kidney stones after drinking melamine-tainted milk and/or milk products. apparently the levels aren’t as dangerous for adults, but damn is that ever messed up. you’ve got to be a pretty callous monster to put an industrial chemical like melamine into milk. apparently it’s a huge crisis in China though, with estimates saying up to 20% of Chinese dairy companies sell melamine-tainted products. yikes. I guess I’ll wait a little while before buying more yakult. o_O huge snowstorm swept through the Ottawa area today, coating the landscape with white fluffy snow. the roads got pretty fouled up, so most people (myself included) stayed inside to do laundry, play with the cat, read, and blog. it was fun. it brought back memories of the snowstorm a few years back in Drummondville—you know, the one that preceded my accident. instead of spinning out on a major highway and landing sideways in a snowbank, though, I have a lithotripsy session to look forward to tomorrow (Monday) in order to break up the kidney stone that’s still hanging around inside me after causing problems in mid-November. that’s a whole other story which I’ll share with you later on; for now, prayers would be much appreciated so that everything goes well.

thank goodness the holiday season is coming soon; hopefully I should have some time to rest and recover from the treatment—no big trips scheduled for now, unless they’re short ones. I keep thinking I’d like to pop by Montreal for a little bit to visit friends but I suppose I’d have to hook something up first. argh planning! we’ll see. things are wonderfully busy here in Ottawa; I spent part of yesterday (Saturday) with another Baha’i friend, following up with some people we met during the Varqa Teaching Project in November. it was a really moving experience—we were visiting a neighbour of mine who seemed to be very receptive to the Message of Bahá’u’lláh and very open to learning more about it through further home visits and Ruhi Book 1. I felt blown away and humbled by the experience. Again, I’ll write more about that later on as things continue to progress; needless to say, it’s the first time I’ve felt so confirmed while teaching the Faith. END_OF_DOCUMENT_TOKEN_TO_BE_REPLACED

Verily the most necessary thing is contentment under all circumstances; by this one is preserved from morbid conditions and lassitude. Yield not to grief and sorrow: they cause the greatest misery. Jealousy consumeth the body and anger doth burn the liver: avoid these two as you would a lion.

Bahá’u’lláh, Tablet to a Physician