So, since we were talking about websitesthe other day, I thought I’d go back to that subject a little and ramble on about the Internet. Because, you know, nothing is more meta than getting on the Internet to read what people have to say about the Internet. So come, let us sit on the porch in our rocking chairs, and shoot the breeze about the good old days of Doberman Pizza and Bahá’í blogging. 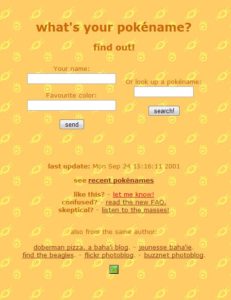 One of my favourite taglines for doberman pizza is “rolled, dressed and cooking since 1994“. That was the year when I first uploaded my homepage to a local Internet Service Provider, complete with wild rainbow colours, insane graphics and even insaner content. One of my first web projects, Find The Beagles, is still online after all these years, and still sports the same look it did way back then. What’s Your Pokéname?, a frivolous name generator that I coded up while in university, has only changed a little since the early days, but miraculously, it still gets over a thousand hits per month.

The “blog” part of the site appeared in June 2000, powered by a handmade Perl script. It wasn’t much more than a makeshift Twitter feed filled with mundane updates like:

thwomp, left at 09:38 on 19/03/01: do you realize that this website is almost completely purposeless? that’s a rather interesting concept!

But then, there were also some interesting bits of news back in the day, too:

the main event, left at 07:23 on 22/05/01: In case you haven’t heard, the terraces of the Bahá’í World Centre in Haifa, Israel are being officially opened today. They’re broadcasting it live on the web, in realplayer format. it’s going on today and tomorrow. Check it out! 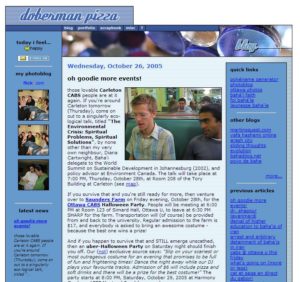 Eventually, I signed up with Blogger and set up a proper blog page. Soon enough, Bahá’í blogs started appearing here, there, and everywhere: Povo de Bahá, Sliding Thoughts (now A Calm Storm), Life of Leif, Warble, Baha’i Thought, Baha’i Views, Anxiously Concerned, Correlating, and Barnabas Quotidianus, to name a few of my favourites—not to mention Martin’s Quest, Vafa.tk, and Arash City. And then, of course, there was Bahá’í Blog, which looked very different from its current incarnation, but was still pretty darn cool. (I mean, they were regular readers of Doberman Pizza, so of course they were cool.)

Around 2007, things had started to get pretty well organized in the Bahá’í blogosphere, as we called it. I had my own 15 seconds of fame when my blog and I were featured in an article for the Canadian Bahá’í News Service. But soon enough, newfangled Web 2.0 websites started appearing, like Facebook, Twitter, and the like, and blogs started losing a lot of the prominence they once had. For me, I also got pretty busy around this time, and I hopped over to Vietnam, where my life got turned upside-down. As a result, Doberman Pizza took some extended down time, and for a while I wasn’t even sure if it would ever get going again.

That’s why things like this Bahá’í Blogging Challenge are really a stroke of genius. First of all, you have the challenge—go ahead, post something new every day, I dare you. A call like that has to be answered, and the requirement to post each day gets the creative juices flowing out of necessity. Second, you have the added benefit of support from all of the other poor souls who are also toiling through the challenge. In fact, some of the old-school bloggers I mentioned above, such as Sholeh at A Calm Storm and James at Warble are participating, too—check out what they’ve been writing, and get wowed by how far back their archived posts go. All in all, it encourages us to rise above the lethargy imposed upon us by our busy lives and just create—spin our words into something beautiful, just like we did in the old days.

Hmm, speaking of the old days, maybe I should go hang out at Shamdogg’s place. ben to tings. you’re e.

4 thoughts on “the old blogging days”