One of the fundamental principles revealed by Bahá’u’lláh is that of the oneness of religion: The idea that all the world’s great religions are, in fact, one religion that has been revealed progressively over time by different Manifestations of one and the same God. The fact that the messages they taught seem to differ is not because they came from different Gods, but because they were revealed at different times to peoples with different experiences and capacities.

That said, other differences have appeared between the great religions we see today: Differences that arise from the additions—and even alterations—that human beings have made to the essential spiritual messages they were given. Re-interpretations of Scripture made by religious scholars and clergy, blind imitation of the past, superstitions arising from ignorance and misunderstanding… all of these have compounded the differences that now exist between the world’s religions. 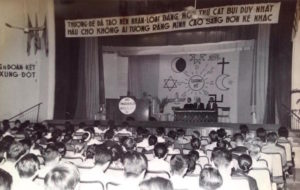 For the nation of Vietnam, the differences between Buddhists and Catholics deepened a chasm that the Cold War had opened. And who ended up being there to try and bridge the divide? The Bahá’ís. From its earliest days, the Vietnamese Bahá’í community championed the cause of inter-religious harmony. World Religion Day, spearheaded by the Bahá’ís and observed in Vietnam every year between 1962 and 1975, gathered representatives of many different religions to deliberate on weighty themes: “Mankind must, and are able to achieve religious unity”; “Religion must be the cause for unity of mankind”; “The purpose of religion is to establish unity and harmony”; and so on.

In 1963, the Buddhist Crisis broke out, the result of the prejudicial policies of the South Vietnamese President Ngô ?ình Di?m, a Catholic, against the country’s Buddhist majority. The crisis ended six months later in a military coup and Di?m’s assassination. At no time in the country’s history was inter-religious cooperation more needed. Only months following the climax of the Buddhist Crisis, the Bahá’ís called for the creation of a “Permanent Council of Inter-Religious Harmony” to be comprised of two representatives from each religion, “to signify a sincere and genuine effort on the part of the two major Religions of their often proclaimed belief that they desire only equality and harmony among the faiths.” This sentiment was echoed by major interfaith groups, as well; a prominent interfaith youth group in Saigon urged the formation of a council to bring together Buddhists and Roman Catholics, and asked that “a leader of the Bahai World Faith be invited” as well, “since even in the past the Baha’is have been urging the establishment of such a Council for Inter-Religious harmony and have also by their efforts demonstrated their belief in both the Buddha and Christ and shown their essential Divine Unity.”

In September 1964, the newly elected Spiritual Assembly of the Bahá’ís of Vietnam formally issued a bold, yet practical four-point appeal for national religious unity which developed the ideas advanced during the previous year:

This audacious appeal, which struck at the core of religious prejudice, must have been dismissed by many as being too fanciful or unrealistic—after all, it called on “the Venerable leaders of Buddhism in Viet Nam” to “publicly proclaim that they Believe that Lord Christ is endowed with the same Divinity and Spirituality as Lord Buddha and identical with Him”, and on Christian leaders to “proclaim likewise that the Lord Buddha is in every way equal and identical to the Lord Christ in His Spiritual and Divine Glory”. What kind of self-respecting clergyman would agree to eat humble pie in such a dramatic fashion? 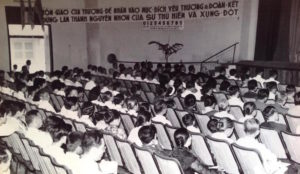 But to the Bahá’ís, these acts were necessary to achieve true unity and prevent nationwide calamity: “Only then can we make the Buddhists and Christians of our sad nation rush into each others’ arms and eliminate any maneuvers to direct them instead at each others’ throats.” Moreover, the Bahá’í appeal was consistent with the belief that all religions are, in fact, reflections of the same message from one and the same God, revealed progressively throughout the evolution of mankind—that all human beings, whether or not they realize it, are in fact following many different representations of one common faith, which is “the changeless Faith of God, eternal in the past, eternal in the future“.

History repeats itself, and mankind rejects and ridicules God’s Messengers as They reveal themselves, denying the life-giving messages They bear. As a result of their rejection and ridicule, civilizations are reduced to rubble, destroyed by their own corruption, their blind imitation of the past, their clinging to ways of thinking, acting and governing that no longer meet the requirements of an ever-evolving humanity. “Unfortunately,” as a Vietnamese Bahá’í representative wrote of the difficulties inherent in their interfaith work, “it seems that human beings act only in response to terrible crisis… and hence have to endure great suffering.”

The original post, world religion day in vietnam, is one of the most popular posts on doberman pizza. With files from Mr. Jamshed Fozdar and Wikipedia. Photos courtesy of Mr. Le Loc.

2 thoughts on “sharing a common faith”