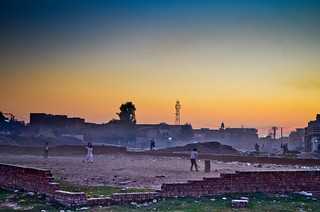 Whatever happens in life, we always have a choice of how to respond. These choices we make determine whether we create hatred or love, war or peace, despair or hope. When we create love, peace and hope in our families and in our neighbourhoods, it grows and trickles upwards through our cities, our regions, our nations and our world—that’s why we say world peace starts with us, inside of us. It makes our lives—and the lives of those around us—lighter, brighter, more livable.

Recently, one of my blogging friends shared a particularly touching story, and I thought it would be nice to share it in connection with this theme. It’s the story of a Hindu man who gave blood to save the life of a Muslim woman—and, in doing so, ended their town’s history of sectarian violence. Originally published in the Toronto Star in 2011, this story is a timeless example of how thoughts of love, expressed through action, can overcome even the longest history of hatred.

Before 2004 life in the village of Basti Mahran in Pakistan was extremely difficult for everyone, but especially for the Hindu minority. Hindu girls were routinely raped by Muslim men. Cattle that belonged to the Hindu villagers were slaughtered and attacks on all Hindus were widespread.

And then a very ill young Muslim mother arrived at the local clinic. She had lost a lot of blood in childbirth and needed a transfusion, but the doctors couldn’t find anyone with the same O-negative blood type. Bachu Rama, a local Hindu man with the same blood-type offered to give his blood.

Before long a group of Muslims charged the clinic to find and kill Ram. The group was led by Mahar Abdul Latif.

Latif hated Hindus and in the 1990s had been part of an extremist group who patrolled the mountains in Kashmir killing all Hindus who crossed their path. As Latif and his gang approached the clinic, they were stopped by a doctor who told them that Ram was this young woman’s only chance.

“I don’t know what came over me,” Latif says. “I remember thinking that here we were refusing to even shake hands with the Hindus, and he was willing to give us his blood. It was a marvelous thing he did. It was the turning point of my life.”

Next morning, Latif visited Ram’s home to thank him. This was the first time in living memory that a Muslim visited a Hindu home in Basti Mahran. Soon everyone heard of Ram’s generosity and Latif’s change of heart, and things in the village began to change.

The women began to talk to each other. The rapes and attacks stopped. Now Hindus and Muslims not only liked each other, they also actively supported each other – even in their religious practice.

This spirit of reciprocity and cooperation spread to every area of life in the village. Women from both communities joined forces in their cotton selling businesses and began to earn four times more that they had earned when selling separately. The villagers successfully lobbied the government to build power lines, roads and a proper water supply.

When I shared this story with other friends recently, someone commented: “I want to believe it… but it just seems to good to be true.” But these kinds of gestures of love, kindness and fellowship happen everywhere, in neighbourhoods and towns in every country around the world. Sometimes these gestures are small, like the kids in our neighbourhood who left a kind note for their neighbour. Sometimes they’re bigger and more dramatic, like Bachu Rama’s gift of blood that welded a town’s Muslim and Hindu communities together.

‘Abdu’l-Bahá, who Bahá’ís take as an example of right conduct, left behind a wealth of Writings that interpret and explain the teachings of His Father, Bahá’u’lláh. Among these are pieces of very practical advice on how to create peaceful, loving communities. My favourite among these goes: “When a thought of war comes, oppose it by a stronger thought of peace. A thought of hatred must be destroyed by a more powerful thought of love. Thoughts of war bring destruction to all harmony, well-being, restfulness and content. Thoughts of love are constructive of brotherhood, peace, friendship, and happiness.” In other words, action follows thought: When we focus on thoughts of war and hatred, warlike and hateful actions will be the result. And when we focus on thoughts of peace and love, peaceful and loving actions will be the result—in our personal lives, our families, our neighbourhoods, our cities, our regions, our nations and our world.

That’s why we say world peace starts with us, inside of us. It makes our lives—and the lives of those around us—lighter, brighter, more livable.

The original post, to a thought of hatred, thoughts of love, is one of the most popular posts on doberman pizza. Special thanks to Trisha at creating reciprocity for bringing the story of Bachu Rama and Mahar Abdul Latif to my attention. Photo: Cricket Passion by Umair.

a prayer for peace day

to a thought of hatred, thoughts of love

honour their sacrifice—by pulling out the roots of war

3 thoughts on “peace starts with us”