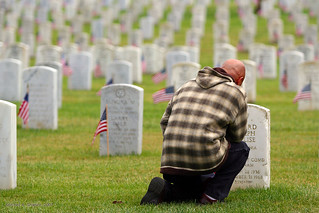 Just a few days ago, I shared a few thoughts about how thoughts of love, expressed through action, can overcome even the longest history of hatred. We always have choices in life: These choices determine whether we create hatred or love, war or peace, despair or hope. If we choose to act in ways that create love, peace, and hope, then we will create a loving, peaceful, and hopeful environment, which will foster cooperation, harmony and well-being. Conversely, if we choose to act in ways that create hatred, war, and despair, then we will create an environment of hatred, war and despair, which will lead to tyranny, oppression, death, and wanton destruction.

War is no joke. For those of us who’ve never been involved in fighting a war, war is literally hell on earth. ‘Abdu’l-Bahá called war “a satanic institution” and “the destroyer of human foundations”:

This discourse of ‘Abdu’l-Bahá’s, which can be found in its entirety in the book Bahá’í World Faith, presents a logical argument on the nature of peace and war, using an analogy to the natural world: A state of “peace” allows the elements of existence to attract and combine with each other in an orderly fashion, to form an infinite variety of created things. A state of conflict, or “war”, on the other hand, in which elements repel and dissociate from each other, leads to the decay and destruction of these created things. So it is with the human world, in which war leads to the destruction of people, families, institutions, communities, and society—not to mention cities and nations:

When we consider outcomes in the world of existence, we find that peace and fellowship are factors of upbuilding and betterment, whereas war and strife are the causes of destruction and disintegration… Consider the restlessness and agitation of the human world today because of war. Peace is health and construction; war is disease and dissolution. When the banner of truth is raised, peace becomes the cause of the welfare and advancement of the human world. In all cycles and ages war has been a factor of derangement and discomfort, whereas peace and brotherhood have brought security and consideration of human interests.

This distinction is especially pronounced in the present world conditions, for warfare in former centuries had not attained the degree of savagery and destructiveness which now characterizes it. If two nations were at war in olden times, ten or twenty thousand would be sacrificed, but in this century the destruction of one hundred thousand lives in a day is quite possible. So perfected has the science of killing become and so efficient the means and instruments of its accomplishment that a whole nation can be obliterated in a short time. Therefore, comparison with the methods and results of ancient warfare is out of the question.

Recent human history is stained with the “savagery and destructiveness” that is part and parcel of war. The Killing Fields of the Khmer Rouge. The Armenian genocide. The Rwandan genocide. The Trail of Tears. Srebrenica. Nanking. Auschwitz. Dresden. Verdun. The Somme. Leningrad. Hiroshima and Nagasaki. Korea. Vietnam. Syria. Yemen. The list goes on, and on, and on. On days such as today—Remembrance Day in Canada, Armistice Day elsewhere in the world—people everywhere observe moments of silence to remember the victims of the atrocities of war. And yet, the “satanic institution” of war, the “destroyer of human foundations” continues. Why? Why do we continue to choose war, to choose hatred, to choose despair?

Humanity still resists the spiritual transformation to which it is called in this day. As ‘Abdu’l-Bahá says, we have perfected the science of killing and brought it to its zenith. Humanity has reached the consummation of its material powers. Material means can bring us no further in the evolution of our species. What is needed now is spiritual evolution. We must learn how to choose peace, how to choose love, and how to choose hope. 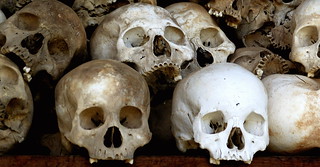 It is not enough to remember our fallen soldiers on Remembrance Day, or the victims of war or the many atrocities that war produces. Yes, we must stare down the rows of gravestones and piled-up skulls, and pray for the progress of the souls who have passed onwards in their journey through the spiritual worlds. But we, the living, must resolve to honour their sacrifice by changing the way we live, and by teaching our children the skills and the virtues they need to make peace a permanent reality.

To show kindness, compassion, and a burning love that embraces all of humanity. To resolve their conflicts through words rather than blows. To act with trustworthiness and justice, and always deal fairly with their fellows. To know that they, and all their peers, are noble creatures of God deserving of respect. To hold the human spirit, and everything which God has placed on this green earth, as a sacred trust, and to guard that trust for future generations. These virtues are spiritual skills that do not develop without effort: We must acquire them through education and conscious practice.

Only when each one of us becomes fully involved in teaching these skills to the rising generations will this world become another world. Ensuring that everyone has the chance to acquire these skills will pull out the roots that feed the curse and scourge of war—allowing it, finally, to be blotted out from the book of humanity.

The original post, honour the sacrifice, not the war, is one of the most popular posts on doberman pizza. Photos: Respects by Mitchell Shapiro Photography, and Red Khmer Killing Fields by Ann-Kathrin.

honour the sacrifice, not the war

peace starts with us

to a thought of hatred, thoughts of love