Today, I thought I’d share something that I wrote as an answer to a question on the Bahá’í AMA that a few of us from Reddit’s Baha’i group hosted on /r/religion last year. The question was: “Why do [Bahá’ís] believe that there is no Heaven or Hell and believe that other religious groups are acceptable to follow?”

“Heaven” and “hell”, for Bahá’ís, refer to states of nearness to and distance from God, respectively. So when you’re living your life in a way that is in line with divine teachings, you’re in heaven.

Let’s give a few specifics here about the nature of the soul. Bahá’u’lláh teaches that human beings have a material self (the body) and a spiritual self (the soul). The body acts as a sort of vehicle that allows us to develop our souls throughout our time in the material world, before progressing into purely spiritual worlds at the time of physical death. And although the exact state of the soul after we die is unknowable for us at this time, Bahá’u’lláh does state that our souls live on eternally and continue on their journey through the spiritual worlds. Notably, He states that we retain our consciousness after physical death, we are able to recognize the souls of those who we were close to, and so on.

If, throughout our life in this physical world, our souls have grown in their ability to show forth spiritual qualities such as selflessness, love, justice, generosity, kindness, truthfulness, trustworthiness, wisdom, and service, we will be close to God, and we will experience that as a “heaven” of joy, gratitude and gladness. If, on the other hand, we spent our lives showing selfishness, hatred, enmity, injustice, avarice, deceit, and so forth, we will find ourselves far from God, and we will experience that as a “hell” of regret and sorrow.

Hopefully that answers the first part of the question. As for the second part, here’s my take. 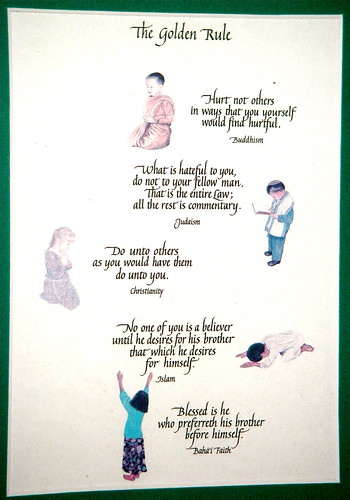 First off, Baha’is believe that there really is just one religion—the “changeless Faith of God, eternal in the past, eternal in the future”, which has been revealed progressively throughout history to different peoples and nations, as that same God manifested Himself to them. The differences between all of the world’s great religions, then, are simply a matter of differences in context: The religion of God was revealed to them in a way that was best suited for them in that place and at that time. Bahá’u’lláh does say that there will be further Manifestations of God in the future, so the Bahá’í Faith isn’t the end of the line. We refer to all of this as God’s Eternal Covenant—God never leaves us without guidance when we need it, and to be fair, looking at the state of the world around us, we certainly seem to be in need of guidance.

Bahá’ís believe that Bahá’u’lláh is the Manifestation of God for today, who has brought the message of unity and oneness that applies to humanity’s needs in the present day. Whenever God sends a new Manifestation to teach humanity and renew His religion, it becomes the duty of all the people of the world to accept the new Manifestation and to follow His teachings, so it is important for everyone to investigate His claims and accept His teachings if the world is to progress.

As to whether people of different religions can achieve that state of “heaven” I described above, here’s my thought: If you live a good life ploughing rice fields as an Indian farmer and you die as a Hindu devotee without ever learning that God had renewed His message, could you be blamed for not accepting God’s religion? Not at all, because as far as you knew, yours was still God’s religion. But if God had renewed His message in the meantime, and somebody came by and told you about it, and you refused to accept it, then your soul would have to live through the rest of its eternal existence with that knowledge.

All of that said, of course, there is no way to get around the fact that people of different genders, races, nations, orientations, beliefs, and religions are part of the same human family. Furthermore, Bahá’ís are specifically exhorted to “consort with the followers of all religions in a spirit of friendliness and fellowship”, so no matter where your religion is on that continuum, you’re still a member of the human family and we’re gonna love you, respect you and value you. Nobody’s going to throw anyone into a lake of fire for our sake, but at the end of the day, there are some serious truths that Bahá’u’lláh presents that everyone should investigate, because they are well-suited for today’s world and can help humanity to progress.

the role of sex and sexuality

do baha’is believe in ghosts?