So, this year is a special year. It’s the 200th anniversary, or bicentenary, of the year Bahá’u’lláh was born (1817). People around the world have been taking the opportunity to celebrate in big and beautiful ways. And many, many people are still celebrating, in smaller, but no less beautiful ways. 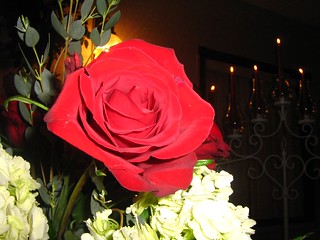 Take us, for instance. We’ve all been really busy, but owing to the unique nature of the occasion, we knew we had to commit to doing something to make the bicentenary stand out. So we decided to go around on the big weekend of the Festival of the Twin Birthdays, and deliver roses to our neighbours. Why roses? Well, because Bahá’u’lláh loved roses, of course. Every year at Ridván, we tell the story of Bahá’u’lláh giving out roses to those who came to see Him in the Ridván garden, so it makes a lot of sense. Anyway, smiles appeared all around as we went around sharing rosy moments of kindness, and it gave us an excuse to talk to our neighbours—some for the first time.

While we were at it, we decided to also collect food for a local food bank that has been stretched thin and was in need of donations. We were hoping to collect 200 items, and by my count we probably have about 40 right now. We’re aiming to do some extra shopping, which might bring us up to about 80 items. That’s still not too bad, and it should help the food bank quite a bit. And, as if you had to ask, why the food bank? Well, because Bahá’u’lláh was always concerned with looking after those who were less fortunate than He was, making sure they were clothed and fed—which earned Him the name “Father of the Poor”. The last time we collected food for the food bank was at Ayyám-i-Há, and there were smiles aplenty when we brought it all in—and even a grand tour of the operation. We’re not expecting a grand tour this time around, but hopefully there will be just as many smiles.

Finally, because every birthday deserves a party, we held a family birthday party for Bahá’u’lláh, complete with a lovely cake, prayers, and stories about Bahá’u’lláh’s life. So there you have it—not a major public gathering, but several little, meaningful things that we shared with family, friends, and neighbours, that helped us to open our hearts a little more to everyone around us, just like a rose lets its petals open to the morning sun.

1 thought on “celebrating the bicentenary”